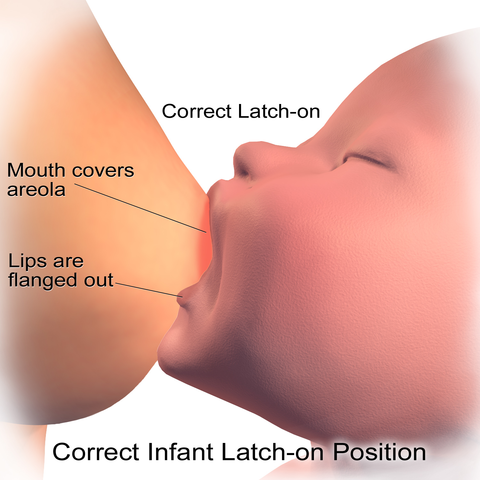 Sadly, Ireland has the lowest rates of breastfeeding in the world. According to an Irish Times article, 56% of Irish mothers breastfeed —this number drops to 6% by the time their babies are 6 months old.¹

For optimal infant nutrition, The Department of Health recommends that infants be exclusively breastfed for the first 6 months. The nutrient content of a mother’s milk changes according to her baby’s current needs ensuring the perfect amount of nutrition for every stage of a baby’s growth and development.

All babies are born with a leaky gut, meaning they do not have a fully sealed intestine. In addition, babies are not born with a fully developed immune system.

Breast milk not only provides all the nutrition your infant needs but also immune-globulins, enzymes, immune factors, and white blood cells. As a result, breastfeeding boosts the baby’s immune system and lowers the incidence of diarrhoea, gastrointestinal problems, respiratory diseases and ear infections. Breastfed babies are less likely to develop asthma and allergies, and breastfeeding is known to lower the risk of sudden infant death syndrome. In addition, human milk encourages the growth of healthy bacteria in an infant’s intestinal tract. All of these benefits remain in place after an infant has been weaned.

Babies are born with a sterile gut.

The digestive tract in a new-born  baby is sterile, meaning it is not yet populated with intestinal flora or gut bacteria.  As a baby passes through the birth canal, the infant is showered with the mothers’ bacteria that colonize a baby’s mucous membranes and gastrointestinal tract. Colonies of bacteria begin to grow after 48 hours.² However, with a C-section, this bacterial colonization doesn’t happen, which can lead to a lowered immune system. In this case, parents can supplement with infant probiotics — talk to your pharmacist to find out what’s best. Around 3 – 6 months intestinal flora mutate and produce antibodies. Although there are differing views, generally by the age of 5 years a child’s immune system has matured.³

Some mid-wives advise mothers-to-be hand express and freeze colostrum from 38 weeks as a precautionary measure should baby become ill later on.

Colostrum is produced by the breast from about the 20th week of pregnancy and during the first few days after birth. It is easily digested and the ideal first food for your baby. Colostrum is higher in proteins than mature milk; many of these are immunoglobulins, or antibodies, that help boost your baby’s immunity. Colustrum also contains fat-soluble vitamins and some minerals as well as a relatively high salt content which assists in protecting your baby from dehydration and is a natural laxative.

As an infant, our nutrition requirements are highest than at any other stage in our life cycle.

What a mother eats and drinks can pass into breast milk. It takes 4 – 6 hours for something you have eaten to make its way into your milk. If a breast-fed baby gets constipated or develops an allergic reaction look for the main culprits in the mother’s diet: namely wheat, dairy and refined sugar. You may also want to avoid seafood which can be high in mercury and can find its way into baby’s brain.

What if you cannot breastfeed?

Get into regular periods of feeding and rest right from the start.

How often an infant wants to eat will change due to growth spurts, which typically occur at about 2 and 6 weeks, and again at about 3 and 6 months of age. It is normal for an infant to demand more feeds during a growth spurt, which will usually last for about 48 hours.

Solid foods are not recommended for infants prior to 6 months as a baby has no gastric juices flowing until he or she cuts their first teeth —also known as milk teeth.

Infants who are fed solid foods too soon are more susceptible to developing food allergies. In addition, eating solids may mean drinking less breast milk or bottle formula which can interfere with your baby getting the right quantities of nutrients.

If parents try to feed an infant who is too young, the baby will push the food out with their tongue (extrusion reflex). After 6 months, the suck-swallow reflexes are not as strong, and infants are better able to hold up their heads and move them around, which makes eating solid foods easier.

Related posts: 3 Signals Your Baby is Ready for Solid Foods