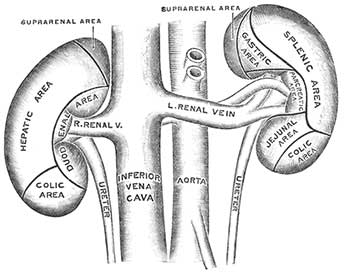 Our kidneys filter approximately 1700 litres of blood daily, which equates to the entire volume of blood in the body, about 60 times a day. For this reason the kidneys need to be supported whenever any level of deep tissue cleansing of the body is attempted.

2 Kidneys: the primary organs of the urinary system

Microscopic cells called nephrons are the functional units of the kidneys. There are approximately 1.2 million nephrons per kidney. Each nephron can produce urine; each consists of a renal corpuscle and a renal tubule.

“The renal corpuscle consists of capillary tufts (glomerulus), surrounded by the proximal portion of the renal tubule. This forms a double-walled cup (Bowman’s capsule) with a capsular space into which the glomerular filtrate is secreted Glomerular filtrate is an ultrafiltrate of the blood plasma and, except for proteins, contains dissolved substances in about the same concentration as that of the plasma.”¹

160 litres of blood filtered per 1 litre of urine passed

As fluid (filtrate) passes through the renal tubule, most of the water, glucose, organic and inorganic ions, amino acids and other matter are removed from the filtrate. Essential electrolytes such as sodium, chloride and bicarbonate are reabsorbed in the tubules. Low levels of salt in blood plasma raises levels of aldosterone, a hormone produced in the adrenal gland that controls the re-absorption of filtrate back into the blood stream. Renal tubes also absorb water and nonelectrolytes such as glucose, amino acids, and nutrients.

The functions of the kidneys:

Each kidney excretes urine through a ureter.

Urine exits the kidneys via the right and left ureters, which deliver urine to the bladder by peristaltic contractions of their muscle walls and by gravity.

Urine is stored in the bladder

As the bladder expands as it fills, when capacity reaches 200-300mls of urine, reflexes are stimulated which lead to micturition (urination). Urine is expelled through a small tube called the urethra, which leads to the exterior of the body.

The urethra controls the flow of urine

The urethral sphincters are two muscular structures that prevent urine exiting the bladder. Relaxation of the sphincters allows urine to be expelled from the body through the urethra. “The urethra is approximately 20cm long in a man and 4cm long in a woman.” ²

Female/Male Differences: The female urethra is short and opens directly to the outside. The male urethra is much longer and has two curvatures divided into three sections:

Urine is a by-product of the kidney’s activity.

The body’s internal environment determines the volume, pH and solute strength. The characteristics of urine will vary depending on the health of the body. Normal urine is amber coloured and transparent. The colour comes from bilirubin, a pigment produced from the metabolism of bile.

In 24 hours an adult excretes about 0.5-2 liters of urine.³ The amount of urine excreted depends on blood pressure, blood concentration, diet, temperature, diuretics and overall health.

Acute disorders usually arise suddenly, often due to infection with inflammation of the nephrons. Chronic conditions tend to be progressive resulting in a gradual loss of function. The heart might not show obvious signs of disease but may manifest more acutely in the kidneys.

Urinary tract infections and cystitis are more prolific in women than men. Nephritic syndrome usually affects children while Nephrotic syndrome, a more severe condition, affects all ages. Men are more prone to tumours in the bladder and Urethritis. Obstructions in the urinary tract such as kidney stones, tumours or blood clots, are a primary cause of renal diseases that affect all other organs of the body.

The kidneys filter the blood; anaemia, blood pressure and sugar levels affect kidney functioning. Exercising the sphincter muscle by contracting, holding and then releasing it will strengthen the bladder. Personal hygiene, urinating when there is an urge to and wearing underwear made of natural-fibres are simple preventative measures.

“Garlic has been known for centuries to function as a natural antibiotic. It destroys the unnecessary and harmful bacteria throughout the human system. It emulsifies cholesterol and loosens it from arterial walls. It is effective in arresting intestinal putrefaction; it is used against contagious diseases, high blood pressure, fevers, parasites, worms, nicotine poisoning, colic, and yeast infections.”4

A low protein, vegan diet, with an emphasis on muscusless foods and drinking plenty of water and herbal teas.

“The herbalist must know which diuretics influence the excretion of solid materials (sediment, gravel, etc.), as these should be administered in combination with demulcent agents such as marshmallow, couch-grass, etc. which will soothe any irritation and forestall any stress that may arise during the elimination process.”5

Antimicrobials, cardioactive and other actions may also be called for.

The urinary system helps to maintain balance, which is always a delicate act. Do not self-prescribe herbs. Consult an herbalist and learn about how you can assist your own healing both in confidence and with confidence.